The male booby, an almost three-foot-tall seabird, points its blue foot skyward to signal the start of its mating ritual. A few ceremonial moves later the pair 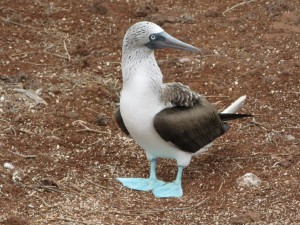 trade twigs and nesting material. It’s clear the dance works; in every direction I see white, downy booby chicks nestled near their mothers in circles of cleared ground that constitute their nests. A few birds incubate eggs under their webbed feet.

On a different island, I admire scores of Nazca boobies, their black wings and face masks accenting their snow-white bodies and orange bills. I am enthralled by their young, some barely out of the egg, others exercising preflight wings. Finally, I pull my eyes away to follow my husband’s finger pointed upward. In the tree above perch red-footed boobies; their chicks balance beside them. Their blue bills fade into the sky; crimson “shoes” accent their brown suits. Through some miracle of nature, their webbed feet have evolved to bend around the branch. How do the land-based Nazcas know to share their island with these tree nesters but not with their land-nesting, blue-footed relatives?

Each day, all three types fly to sea, swoop down to snatch fish, then return to their separate domains. These birds, clown-like on land, majestic in flight, epitomize for me the blending of two ideas often considered at odds: evolution and creation. I have studied little science, but am intrigued by all I learn here. Religion comes more naturally to me. As a one-time religion major, I can, or could, cite the various intellectual proofs for the existence of God. But I agree with Soren Kierkegaard that ultimately belief in God requires a leap of faith. I’m more likely to reaffirm that leap when confronted with nature’s bounty than with logic.

My husband and I chose this 2008 trip to the Galapagos as part of our long-range plan to go somewhere warm and interesting every February. Typically, we try to leave the news as well as the cold behind. I do not think about arguments between evolutionists and creationists when I leave home; but here, in the islands that inspired Darwin’s work, evolution is on my unscientific mind. Apparently, Darwin didn’t start out as much more of a scientific researcher than I am, but during his visit to the Galapagos archipelago, he noted how similar the creatures were from island to island, while perfectly adapted to their specific micro-environments. As I picture the tree-nesting red-footed boobies, I wonder: need beliefs in evolution and a divine force necessarily be at odds?

Before the trip, I gave my husband Jonathon Weiner’s The Beak of the Finch, a book that describes a landmark study that took place on Daphne Major, a barren Galapagos island. Secondhand, I learned that within three generations, finches’ beaks adapted to the seed supply, which varied according to rainfall. Seeing the finches evolve before their eyes, the researchers concluded that natural selection occurs even more rapidly and effectively than Darwin understood. “Darwinian competition is not only the clash of stag horns, the gore on the jaws of lions…Competition can also be a silent race, side by side, for the last food on a desert island where…the only sound of battle is the occasional crack of a…seed.” (p.63)

As we pick our way across lava rocks, plod along sandy beaches, encounter an astounding variety of sea life during daily snorkeling expeditions, and cruise from isle to isle on the intimate ark that is our week-long home, I snap an occasional picture. But mostly, I gawk, listen, and ponder nature’s intricacies.

A lava lizard jumps onto my leg. My startled jerk shakes him off. I stand still, and he lands again. Our naturalist and our Ecuadorian guide confer and decide that the small lizards must recognize color; females have red heads, and this male seems enamored of the red whistle dangling from my belt loop. I wait quietly. Finally, the lizard jumps again to a dozen camera clicks. While silently apologizing to my little friend for deceiving him, I wonder how he will survive the evolutionary process if he can’t distinguish between a potential mate’s crimson head and a bit of red plastic.

On South Plaza Island, we enjoy dozens of comically ugly land iguanas resting in the shade of a cactus with spines so spiky that I draw back my hand instinctively. The iguanas lazily snap up falling blossoms, but they don’t attack the prickly plant itself. On Genovesa Island, where there are no iguanas or other vegetarian predators, the spines of a similar cactus have evolved from sharp thorns to soft bristles. With wonderment, I run my fingers over them. Same plant, each adapted to its own island environment.

The white, sandy beach of Espanola Island’s Gardner Bay is littered with piles of sea lions—“piles,” because these thigmotactic creatures love to touch each other. Though I am tempted to anthropomorphize them—especially when one waddles on its flippers over to our group and unties a sneaker—the guide explains that their nuzzling is random, not based on friendship or love. A female sea lion has given birth so recently that the afterbirth lies nearby in a bloody mass. While the pup suckles, the mother is learning its sounds. This is how she will recognize her own pup from the dozens of others when she leaves to fish for dinner. We continue our walk. Later, we see two frigate birds fighting in midair for the afterbirth, no doubt a good source of protein. I marvel at nature’s interwoven complexity.

On Rabida Island, a young pelican puts its entire head into its mother’s capacious beak to eat her regurgitated fish. A hawk perches nearby, waiting for a chance to pounce on an unprotected baby. I root for the pelicans. But I know that for the wildlife, this is no fantasy land. Sometimes the hawk must get its prey; sometimes babies will be snatched and eaten. Whether I like it or not, it’s a necessary part of the natural order.

I muse that God was surely busy on the fifth and sixth days of creation. The Galapagos archipelago swarms with fascinating creatures of sea, land, and air that are, it seems to me, a testament to both Divine imagination and evolution. In this place, knowledge and awe are intimate traveling companions.

The more nature exhilarates me with its wonders, and the more I learn about its miraculous relationships, the more puzzled I am by the so-called conflict between science and religion, between Darwinism and creation. For me, an observant Jew who reads the Genesis creation story at least once a year—more metaphorically than literally—there is no clash between the evolution that screams its presence on the Galapagos Islands and the Divine force that, I believe, powers every cactus and iguana, every parrotfish and pelican. In my eyes, both nature itself and the human ability to comprehend its complexities reflect and bear witness to the Creator.

The promise of a kosher meal lured us. My husband Julian and I had eaten vegetarian style for two weeks, first on a windjammer cruise off the Maine coast, then as we camped our way home across New England. Along the way, we stopped at the camp I had attended for six summers in the… END_OF_DOCUMENT_TOKEN_TO_BE_REPLACED

The blog I posted last month about unexpectedly seeing Aunt Betty’s face reminded me of a time I couldn’t conjure the face I needed. Here’s how it happened…   “Good-bye, Dear. It was wonderful having you.” Aunt Emilie’s loving blue eyes seemed to peer into my heart. I hugged her tightly. She was my favorite… END_OF_DOCUMENT_TOKEN_TO_BE_REPLACED

“You have no idea what you did for me tonight,” Irene said, leaning down to give me a warm, tearful hug. I hugged her back. “No, I don’t. What did I do for you?” I barely knew Irene. We had met the preceding fall at two training sessions for this whitewater trip down the Rio… END_OF_DOCUMENT_TOKEN_TO_BE_REPLACED

Flat-topped umbrella trees dot the hillside to the right of the faint track at Kenya’s Maasai Mara Game Preserve. To our left, tall trees seem to meld into the blue sky. The driver/guide stops the Land Rover. On closer look, those aren’t stately trees; they’re giraffes. While the other travelers focus their cameras, I focus… END_OF_DOCUMENT_TOKEN_TO_BE_REPLACED